The evolution of a meme is a beautiful thing to watch.

In the 24-hours since the image of a mitten-clad senator Bernie Sanders first drew attention at U.S. President Joe Biden’s inauguration, the meme has naturally changed and evolved. At first the Internet was simply obsessed with Sanders’ “Vermont grandpa-core” look, remarking on how he looked like he was on his way to the post-office, or like a chilly parent at their frigid kids’ outdoor sports game.

Now, the meme’s evolved, and we’ve collectively moved on to simply placing Sanders in places he seems like a natural fit. Because why not imagine Bernie hanging out with sad Keanu or on the Toronto sign?

Of course Canada’s prodigal son Ryan Reynolds got in on the fun with his own spin on the meme.

But a new web tool makes building your own Bernie memes even easier for the not-so Photoshop savvy, allowing you to drop photographer Brenden Smialowski’s iconic image of cosy Bernie literally anywhere in the world. New York software engineer Nick Sawhney developed the tool, which uses Google Maps to place Bernie at any address or place the service recognizes.

You can simply type a place name or street address, and the webpage will load you your very own version of the Bernie meme. Canadians took the chance to place Sanders in some iconic locales in their own neighbourhoods, like Vancouver’s Congee Noodle House or its international airport.

Or even just a driveway in Edmonton.

American politician Bernie Sanders took time out of the inauguration to visit Goodwill in Calgary, Edmonton and Grande Prairie!

Admittedly some addresses work better than others, like when we tried to plunk Bernie down in front of the old HuffPost Canada office in Toronto. 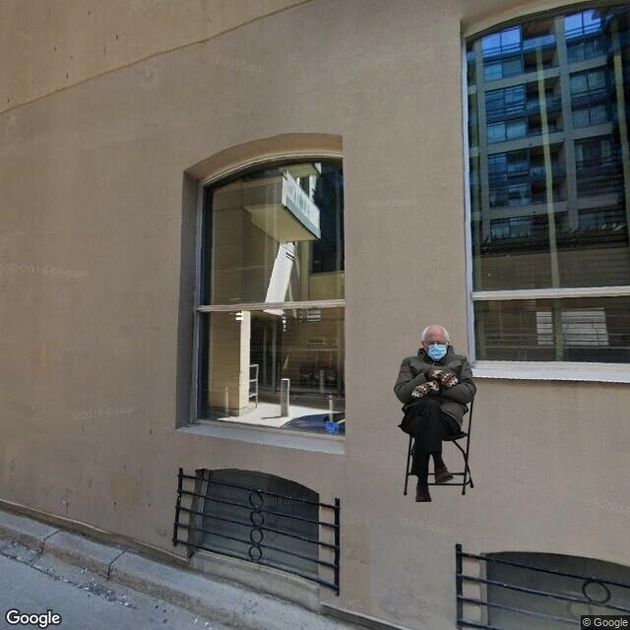 This is what happens when you try to input the old HuffPost Canada office into the Bernie meme generator.

On Twitter, Sawhney said the site has crashed several times since its launch due to overwhelming demand. He is funding the server out of his own pocket, and has launched a fundraiser on buymeacoffee.com to fund both the server and associated fees from Google Maps and keep the Bernie memes going.

When asked about the iconic image yesterday, Sanders himself said he wasn’t looking to inspire a meme, but rather was simply bundled up against the cold.

So go forth and put Bernie in front of your childhood home. It’s the least we can do to smile during these trying times.

‘My life was beautiful’ before he turned me...

Group calls for Quebec women’s shelters to be...

‘We need to change this’: Heritage Canada is...

Allison Hanes: Bring back kids’ sports, but not...

@2021 - All Right Reserved. Designed and Developed by

February 23, 2021
We use cookies on our website to give you the most relevant experience by remembering your preferences and repeat visits. By clicking “Accept”, you consent to the use of ALL the cookies.
Cookie settingsACCEPT
Manage consent

This website uses cookies to improve your experience while you navigate through the website. Out of these, the cookies that are categorized as necessary are stored on your browser as they are essential for the working of basic functionalities of the website. We also use third-party cookies that help us analyze and understand how you use this website. These cookies will be stored in your browser only with your consent. You also have the option to opt-out of these cookies. But opting out of some of these cookies may affect your browsing experience.
Necessary Always Enabled

Any cookies that may not be particularly necessary for the website to function and is used specifically to collect user personal data via analytics, ads, other embedded contents are termed as non-necessary cookies. It is mandatory to procure user consent prior to running these cookies on your website.