Interior Ministry spokesman Tariq Arian told AFP that, based on initial reports, two people had been killed and another 12 wounded in the blast.

In a video posted on Facebook soon after the explosion, Saleh, with bandages on his left hand, said he had been travelling to his office when his convoy was attacked.

“I am fine but some of my guards have been wounded. My son, who was in the car with me, and I are both fine,” Saleh said.

“I have some burns on my face and hand. The blast was strong.”

The roads in the vicinity of the bombing were closed off.

Interior Ministry spokesman Arian said the blast also ignited a huge fire in the area, a section of Kabul where shops sell gas cylinders for use in heating homes and cooking. He feared the casualty figures could rise further.

Health ministry officials said two bodies and seven injured people had been transported to the hospital so far.

Journalist Naseer Rahin in Kabul told Al Jazeera there was no immediate claim of responsibility for the bombing, which comes just before long-awaited peace talks between the Afghan government and the Taliban in Qatar’s capital, Doha. 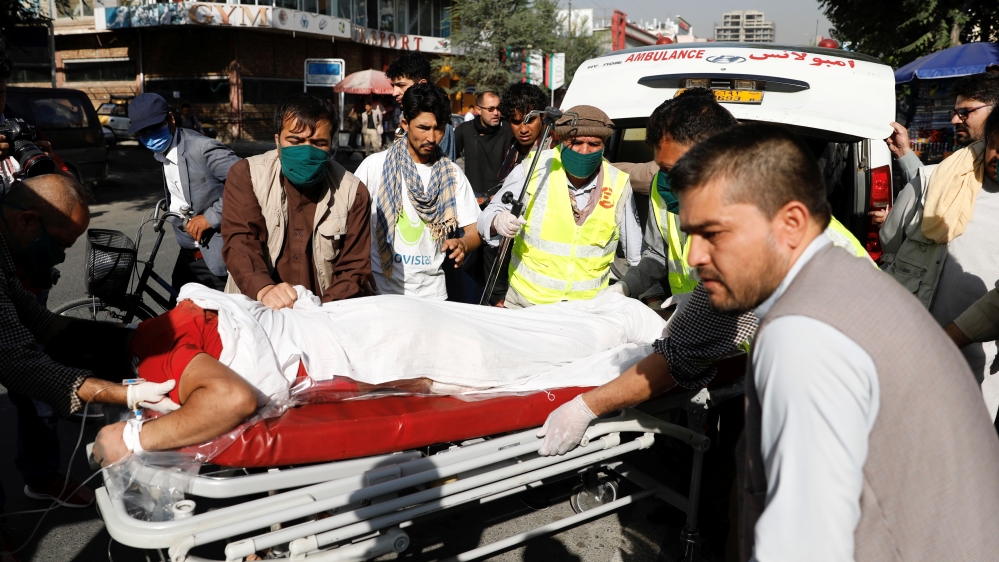 Afghan men carry an injured to a hospital after a blast in Kabul, Afghanistan [Mohammad Ismail/Reuters]

In  his latest remarks Rahin reported that Saleh said Afghans will never deal on their values and not compromise.

Taliban spokesman Zabihullah Mujahed was quick to deny the rebels were involved in any way, saying that “today’s explosion in Kabul has nothing to do with the Mujahedeen of the Islamic Emirate”, as the Taliban call themselves.

Saleh, a former intelligence chief, has survived several assassination attempts, including one on his office last year that killed 20 people.

Officials and diplomats have warned that rising violence is sapping the trust needed for the success of talks aimed at ending an armed conflict that began when the Taliban was removed from power in a US-led invasion in late 2001.

A Calgary man knew he had a brain tumour that caused him to black out but rejected his doctor's order not to drive and...
Read more
News

Secretary-general of the Yoruba Council of Elders, Dr Kunle Olajide, says it is unrealistic for the Oduduwa Republic to be achieved without violence. Olajide made...
Read more

New Hampshire State Police/Facebook Britany Barron, Jonathan Amerault & Armando Barron. A New Hampshire man and his wife have been arrested and charged with the...
Read more

Guest column: First victims of Second World War — and many after — must always be remembered

Article content continuedJust like that, bombs were dumped onto the town. It started first on the All Saints Hospital levelling it to the ground...
Read more

Trump says he did not discuss election with court nominee Barrett

The BC Liberals have officially confirmed Stephen Roberts as their candidate for Saanich North and the...
Read more
Load more

canada4news.xyz is your news, entertainment, music fashion website. We provide you with the latest breaking news and videos straight from the entertainment industry.
Contact us: contact@canada4news.xyz
Copyright © 2020 canada4news.xyz | All rights reserved
%d bloggers like this:
We use cookies to ensure that we give you the best experience on our website. If you continue to use this site we will assume that you are happy with it.OkPrivacy policy